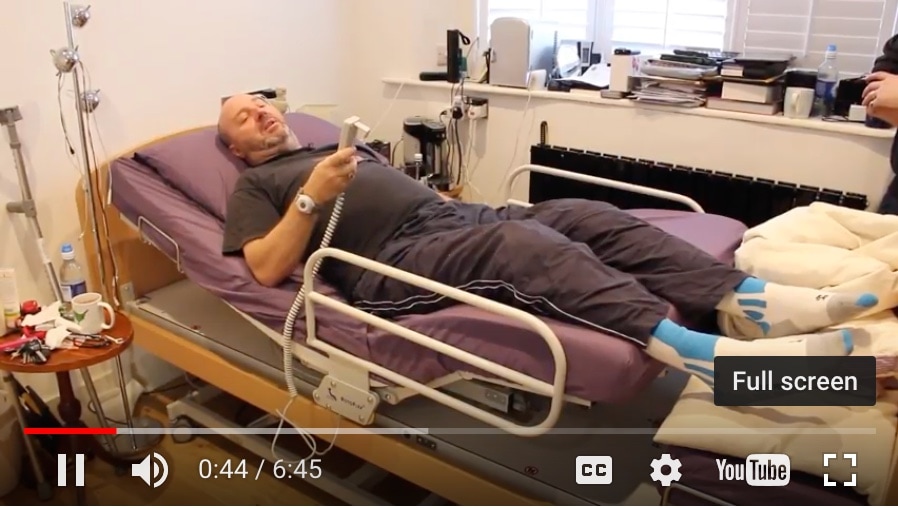 Watch the video via this link: http://www.theraposture.co.uk/case_studies

Despite living with chronic spinal nerve damage, paralysis and other associated conditions, Mike Wardle, 55 from East Sussex, has been able to reduce his care needs through ownership of a Rotoflex bed.

Mike graduated from Reading University and served in the Police Force for seven years. In 1990, he was assaulted whilst on duty in Gosport resulting in major injuries to his lower spine. He subsequently underwent several back operations which stabilised his vertebrate for 15 years during which time he could walk again. He returned to higher education and qualified with a degree in Radiography which led to a position at the Conquest Hospital, East Sussex.

Following another seven years in a job he enjoyed, Mike began to feel pain and weakness in his legs again. He was forced to give up his position with the NHS and since then his condition has deteriorated. All associated with his original injury aged 28, Mike now has to manage continual pain resulting from a multitude of issues including a collapsed spine above his original fusion, multi-site osteoarthritis, nerve damage, leg paralysis and a cyst on the brain.

Despite these challenges Mike focuses on being positive and is able to remain more independent thanks to a powerchair, Motability adapted car and a Rotoflex bed. The Rotoflex from Theraposture is an electrically operated bed that encompasses powered profiling, height adjustment and a rotational action that moves Mike from a lying to a fully upright seated position – ready for a safe wheelchair or sit-to-stand transfer.

The Rotoflex means Mike can start his day on his own terms – a vital solution for him. Mike explains: “I was originally provided with a profiling bed by Social Services as I needed to keep my spine moving at night to avoid severe stiffness. Plus this stopped my kneecaps being dislocated when I am turned. However the only problem was that I was unable to get in and out bed independently because my quad muscles were too weak and I required two carers to assist me. I needed to find a better solution.”