Apple have unveiled the designs for 13 new emoji tailored specifically to reflect people who have disabilities.

If you use an electronic device in this day in age (and if you’re reading this you probably do) then chances are you use emojis every now and then. And why not. They can be funny and help convey your mood. Originally a minor add on to text speech, emojis have grown into almost a language of their own with, at the latest count, 2,666 different ones available. They’ve even spawned a major blockbuster film! It’s hardly surprising then that with their ever growing popularity, there is increasing demand on software companies to come up with more diverse emojis that offer a broader representation of society.

Ranging from sensory impairments to physical ones and even, to an extent, learning disabilities, the new emojis were though up in an effort ‘to better represent individuals with disabilities’, according to the proposal made available online.

Given the enormously diverse range of disabilities that exist, the team appears to have gone for those (initially at least) which reflect the most popular searches shown by Google data. Who knows, if they prove popular we might see further ones rolled out down the line.

The researchers have been nothing if not thorough. The brief that comes with proposal outlines the following about wheelchair emojis:

‘For “person in a mechanized wheelchair” and “person in a manual wheelchair” we felt two separate characters were necessary. The type of assistive technology that is used by individuals is very personal and mandated by their own disability need. For someone who cannot self-propel and therefore uses an electric wheelchair, it would not be realistic to only show a manual chair. For those who can use a manual version, it would not be realistic to insinuate that they have less mobility than they do. Therefore, these should be seen as two totally separate forms of assistive device. Generalizing these two would be akin to assuming the motor scooter and kick scooter are the same thing.’

Interestingly, two separate dog user emojis have also been designed; one specifically for guide dogs and another for service dogs. The proposal explains: 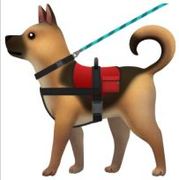 ‘For “guide dog with a harness,” proposed under the Blind and Low Vision section, and “service dog with vest and leash,” we considered the alternative of encoding just one character. However, these dogs utilize different equipment to assist those they support and are therefore, visually different in their representations. […] The two animals indicate very different types of disability that should not be conflated as one.’

Service dogs can provide invaluable support for people who have a hearing impairment or have hidden disabilities such as Autism, seizures, anxiety or PTSD.

Below are some of the other emojis proposed by Apple. You can read the full report by Apple here. 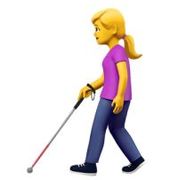 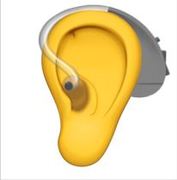