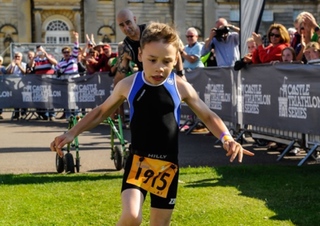 He is just 8 years old but his energy and his will power have catapulted him to the dizzying heights of a champion and inspirational figure. Bailey Matthews was diagnosed with cerebral palsy as an infant but this couldn’t stop him from completing a triathlon and crossing the finish line without help.

This young athlete from Doncaster, South Yorkshire, was born prematurely and diagnosed when he was 18 months. As a result from this condition his coordination and mobility are severely affected when managing daily tasks. In fact his parents, Jonathan and Julie Matthews, said that Bailey had to learn to walk four times and they were quite surprised when he indicated to them his intention to participate in the race. Given their son usually struggles to walk unaided, they were understandably concerned, but Bailey was determined.

A 100 meters lake swim, a 4 kilometre bicycle ride and a 1.3 kilometre run represents a tough challenge for any child his age, but Bailey wanted to a chance to prove what he could do.

In order to reach that finish line, Bailey began a hard training regime. He didn’t want to just take part in the triathlon, he wanted to achieve his best possible result. His training included sessions with a special bicycle and trips to a local lake to swim.

During the race, his father was always by his side, but he neither needed nor asked for help, he preferred to fall down and get up by himself.

As a token of his willpower, a few meters from the finish line he decided to leave the walker to cross it on his own. Hundreds of people decided to stay to see Bailey reach his goal. And even though he fell down four times, they cheered him on and encouraged him, helping him make the final push to complete the race.

Across the finish line, his proud mother and his younger brother were waiting to embracing him. Bailey also received a medal especially commissioned for him in recognition of his great feat. One and all were delighted with the turn out of the event, and Bailey made it clear that sheer will power and the human spirit can fuel a person to challenge barriers and defy expectations.