We are now less than one month away from the final of the Blackwood Design Awards 2017/18. The shortlisting is set to close at the end of this week but to give you an idea of the calibre of entries this year, we caught up with one of the entrants to find out more about his entry.

Andrew Taylor is a recent graduate of the University of Bath (which already has one past winner among its alumni) and entered his end of year project in the Best New Concept category. We asked Andrew…

Can you give us an overview of your entry, for those who haven’t seen it yet?

“I have designed a device which allows visually impaired athletes to partake in sports, by using sound to understand their environment, instead of vision. The device looks similar to a pair of running glasses, with a built-in camera, processor and bone conduction headphones. At the moment, the device is focused on track running, allowing the user to stay within the two white lines of their lane while running around a 400m running track. In the future I hope this same principal can be extended to other sports too.”

How does it work?

“A bit like a parking sensor in a car! The camera on the device captures a live video of the athlete’s lane and a computer vision algorithm calculates the user’s current position within their lane as well as their target direction. This information is converted into a stereo balanced audio signal and is relayed to the user through the headphones. In its simplest form, this produces a beep which appears to originate from in front of the user. By following the direction of the beep, the user is guided around the running track.” Was there a particular motivation for designing this product? Why visually impaired athletes in particular?

“I have always had an interest in products designed for people who have disabilities and the ways in which technology can be used to help manage the unique challenges they face in their day to day lives. I was shocked to learn that less than 5% of people in the UK who have a visual impairment take part in regular exercise, mainly due to the lack of accessibility to visually impaired sports. Because of that, I set out to design a product that would let visually impaired people practice a sport truly independently.”

Were you already aware of the challenges faced by people who are visually impaired or was this a learning curve?

“It has been a huge learning curve! Before I started designing the product I conducted interviews with people with visual impairments, as well as people who volunteer as guide runners for the visually impaired to try to understand the challenges they face while practising sport. This information was invaluable in the early stages of development as it gave me crucial insights into the requirements of the device. I discovered that one of the main obstacles people with visual impairments face is the logistical and financial difficulties associated with finding a guide runner to train with regularly. Many also told me that the option to practice sport without reliance on a guide runner would be a huge benefit as it encourages a real feeling of independence.”

What early challenges did you encounter when coming up with the first prototypes? Were there any false starts?

“One of the major issues was finding suitable hardware to run the computer vision software. As a mechanical engineer, software development was something I had never really done before. The first iteration of the code was so poorly written, it couldn’t even process video at 1 frame per second while running on my laptop, let alone on a processor which had to fit inside the frame of a pair of glasses! After many late nights and some good advice from software engineers, I streamlined the code to run on a Raspberry Pi Zero - which is about the size of 2 fifty pence coins. Now the device is truly portable with the camera, battery and processor all integrated inside the frame.” How did the second prototype improve on the first?

“There have actually been 5 versions of the physical prototype now, with countless iterations of the software algorithm. By using 3D printing to manufacture the frames, I have been able to quickly turn around new designs, with each one building on the functionality of the last. The version I am currently working on aims to improve the ergonomics of the product following an anthropometric study. This will mean that the glasses are comfortable and well balanced for all users – crucial if they are going to be used while running at high speeds.”

How did you involve the target users in the design process?

“Following on from the interviews I conducted at the start of the design process, I have kept in touch with the interviewees to gain feedback on the design. This has been incredibly helpful up to this point. For example, I found out that the user interface can’t rely on visual information such as screens or symbols, so instead need to include audio feedback and tactile buttons for controlling the device. I also hope to have manufactured a few prototypes to hand over to visually impaired volunteers for testing this summer.”

What is happening with the prototype now?

“I’m happy with the current state of the software algorithm as it is working well with the selected hardware. My next steps are to finalise the design of this version of the frames and send it off for manufacturing using a rapid prototyping technique called SLA. This will produce a few prototypes which are stronger and more durable than previous versions which were made using cheaper, but less robust technique called FDM. My goal is to have these prototypes ready for full testing this summer. I can then see what is working well, and which areas need improvement as I continue development.”

How did you hear about the Blackwood Design Awards and what prompted you to enter?

“This device started out as a final year design project at the University of Bath, and my supervisor was very supportive when she heard I planned to continue working on it after I graduated. She was aware of the competition as she had also worked with Tim Morgan, who won the BDA in 2013 for his Mountain Trike. Following his strong example, I am hoping to be the second Bath Alumnus to win the award.”

What would winning the BDA mean to you?

“It would give a fantastic boost to me and the development of the product. I am very excited by the opportunity to be able to discuss my design with the judges and those who work with Blackwood and hope to be able to make the most of their experience and advice. The prize money would also go a long way in funding the manufacturing of more prototypes for testing, and the publicity associated with winning the award may even help me find more people who are interested in trying the product for themselves.” 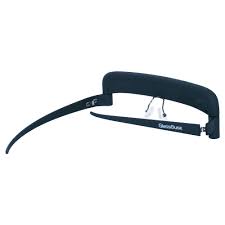 Glassouse, winner in 2016 has a new version out!