It’s not exactly news that the way cars are thought of is changing. Particularly with regard to people who have disabilities. The driverless car is undergoing trials and I seem to remember reading that it has even been approved for the road in one or two cities in the USA.

The question of access remains an issue though. What about people who struggle to actually get into a car unaided? Are they simply denied the right to go out unless back up is there to help them?

Well, staying with the theme of cars for a moment, we found this little bit of technology - the Kenguru.

It looks a bit like a smart car but the big difference is that it opens up at the back so that a wheelchair user doesn’t need to transfer out of their chair and into the driver’s seat. They simply roll in through the back courtesy of a little ramp that pops out when the hatch is opened.

Controlled not with a steering wheel but with a handlebar, there is an intelligent simplicity to this design. It looks like something that was designed purely to enable wheelchair users and take them from A to B. It means that people who are otherwise reliant on other people giving them lifts and helping them in and out of cars can travel independently. The idea came to fruition through a young lawyer, Stacy Zoern, who has been a wheelchair user all her life. Stacy was frustrated by the fact that she was obliged to live near her work for commuting. She couldn’t afford the adapted car she required, having totalled her previous one years earlier. She was desperately trying to find a solution in order to reduce the impact city centre living was having on her bank balance.

She discovered a Hungarian designer called Istvan Kissaroslaki who had come up with the Kenguru but the project was stalling after the financial crash. After some negotiations, she helped him set up shop in the US and suddenly they were in business. Now Stacy gets daily messages from people telling her how the Kenguru has made a huge difference to their lives.

With a maximum speed of about 30 mph this car is definitely only for driving in town. This undoubtedly will be an issue if you wish to travel further afield. And then there’s something else. 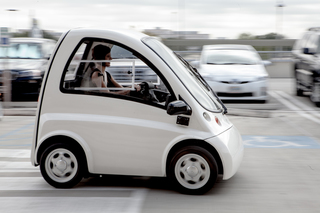 Is it useful? Yes. Can it make a difference to someone’s life? Absolutely! Does it look smart and sleek? Well… beauty is in the eye of the beholder I guess. Personally I’m not a fan of the exterior design. Maybe I’m being shallow here but to be fair when people buy a car, its appearance is something they concern themselves with. And why not? After all, for plenty of people driving is not just a matter of logistics, it’s fun. Cars are something to be enjoyed.

Then again you might disagree with me and say that the freedom that it affords people eclipses everything else. Or you might actually feel that it’s a stunning car. Like I said, beauty is in the eye of the beholder.

What do you think of the Kenguru? Is it something you would potentially want to try?