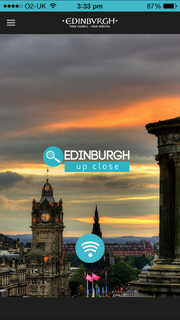 Gavin Neate’s latest venture is a tourism based app created in collaboration with City of Edinburgh Council.

Up Close uses beacon technology to disseminate information to users in close proximity to a particular location who have opened the app on their smartphones.

All of the locations are currently based on the Royal Mile – from the closes to the various museums – and depending on the preference or need of the consumer, they can play audio with history about the locale narrated by a professional story teller or read it for themselves instead.

Using one location as an example Gavin briefly summarised it’s story, he said: “Chalmers Close tells the story of Trinity Apse, a church which when they were building Waverly railway station they said ‘we have to move the church’, so they took all the pieces up to Calton Hill and 10-20 years later then rebuilt it up at the close and it tells the whole story. 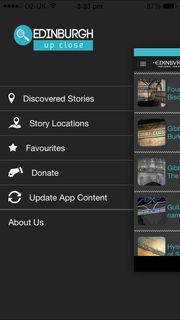 He added: “The storyteller tells the story, it’s a professional story teller from the storytelling centre; she wrote the stories and tells it in a really nice, emotive way. Towards the end of it, it gives you a little bit of information about the museum that you may go to, say for instance you are on Chalmers street and you see a bell, it would say the bell is now on display in the Edinburgh museum. It connects it all.”

While this particular innovation isn’t primarily focused on disabled people, it harks back to one of Gavin’s key philosophies that everything should be universally accessible for all, disabled or otherwise. The point being there ideally shouldn’t be a segregation of needs, technology should serve us all. There are a few ways in which Up Close proves useful for those with disabilities; if you are unable to pick-up leaflets for additional info and have a Bluetooth headset or headphones in place, simply pressing play and listening is an easier alternative; or if you have hearing issues you can read a written version of the audio; alternatively if the standard narration proves unsuitable you can use your phone’s speak function and control the speed of narration.

All of these features come as standard, demonstrating that many requirements can be met fairly easily in a streamlined fashion rather than having to kick and scream your way to having proper accessibility. Given the app is a tourism focused app, some of its primary users will be foreign visitors to Edinburgh, and the fact there are text versions of the stories means the whole translation process is made much easier.

Gavin said: “The whole story is in text which makes it very easy to do in different languages, and it’s somebody who sits on a computer; if I send the text to my friend in Portugal to translate and put it directly into the app, the next person who downloads it has it in the app; potentially the translation is much cheaper than going through lots and lots of text. We’re talking maybe a maximum of 27 stories – an hour and a half or two hours of translation services rather than days and days of it.”

Like what you just read? Check out some more discussions on bespoken below...

Easily accessible, or not? That is the question.