One of GB's Most Successful Paralympians Looks Back at his Career 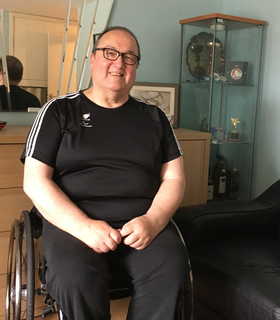 A 5-time Paralympic medallist and a Blackwood customer, Tom killin has lived in supported accommodation in Edinburgh since 1982. I recently sat down with Tom in his Blackwood home on the east side of the capital to look back at his decades long career in sport and the wider impact it had on his life.

The biggest impression it made, interestingly, was not actually sports related. As an athlete, Tom met his wife Maggie who also competed at Paralympic level and the two set up home in Edinburgh immediately after the wedding. “I was born and bred in Edinburgh”, says Tom. “I got married in London and 2 days later we moved up to Edinburgh.”

Several decades on and Tom speaks very highly of Blackwood Homes and Care and the development his family have called home for over 30 years. “We are lucky that Blackwood made this complex as it’s very central and a great place to live. It’s a good house and it was easier to bring up our baby daughter here. Blackwood is very quick to provide help and do repairs. We are more than happy here.”

Two successful athletes living under one roof is sure to bring a certain competitive element to their relationship and Tom jokes that Maggie likes to wind him up a bit on that score. “My wife got two gold medals in the Paralympics, but I have 5 medals - silver and bronze. She keeps telling me that, keeps rubbing it in.”

Far from being born with a disability, Tom was a keen football player in his youth before the universe decided to move the goal posts in a dramatic way. “I was involved in a road traffic accident in which I sustained a spine injury. After that I ended up in a wheelchair.

“I went to a national rehabilitation centre in Stoke Mandeville hospital which encouraged me to do sport to get a good balance in my wheelchair.” A medical recommendation, which the doctors probably thought would serve as complimentary therapy, would in fact turn into a life defining passion.

His athletic career was put on hold for several years as Tom wanted to spend more time with his family. “When I got married I stopped competing because I had a family. After a few years I met someone in Glasgow who was doing curling on ice and he suggested that I go along to curling club on Sunday to try out and I did. I ended up representing Scotland and Great Britain for ten years.” 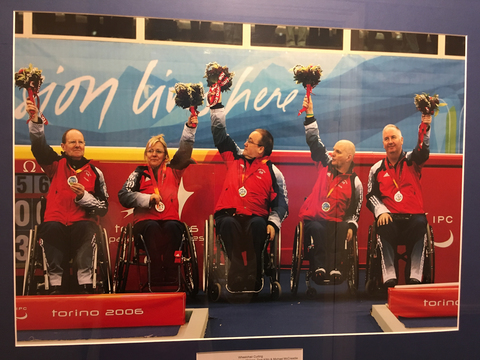 “In 2006 I was selected for my first Paralympics in curling in Turin, Italy. I was selected again in 2010 for the Vancouver games and in 2014 again for Sochi. I have competed all over the world, including South Korea but most often in Europe, America and Canada. I have a lot of Paralympics medals and won World Championship medals in 2005 and world silver medal in 2011.

Sporting times mean happy times to Tom who achieved immense success and made friends all over the world. “I still love to see people I used compete with and people I competed against. A few years ago, I was inducted into Scottish Disability Sports hall of fame for my sporting achievement. I’m very proud of my achievement.” 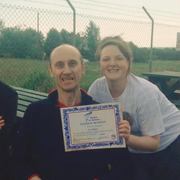