With the announcement of The Blackwood Design Awards 2018 shortlist imminent, we’ll be interviewing Designers, Engineers and World-Renowned Thinkers to get the inside scoop on the most innovative developments in the field of Assisstive Technologies.

In the second in our series of interviews, we talk to Ashley Hearton, creator of the Zok and entrant in the Blackwood Design Awards ‘New Concept’ category. The Zok is a stump sock for amputees that can monitor moisture levels and detect the build of bacteria that may lead to infection, an all too common health issue and cause of much frustration.

Working as a Masters student at Loughborough University, Ashley developed the concept of the ZOK from a task to improve well-being. Through her research and development, an idea grew that would become a succinct solution to an issue faced by most, if not all amputees- the risk of stump infection. 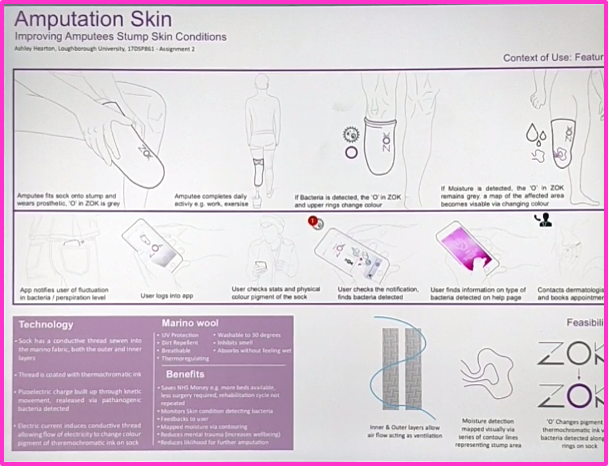 I began to think about prosthetics, and if wearable technology had ever been incorporated into things for amputees. I considered the possibilities within an amputee’s stump sock and see if I could track motions which might show how I could help.

Once this idea developed, I began gathering information. Through research I learned about the risk of infection and moisture. It became apparent this issue was not only costing money for the NHS, but was a major cause of frustration for amputees.”

Post amputation is an extremely precarious and delicate time in an amputee’s life, one that can be made all the more taxing should infection occur. Technology literally weaved into the fabric of the sock can indicate specific areas at risk, and the ‘O’ in the Zok logo changes colour. Through the companion app, amputees can observe the state of their stump, and the app can recommend a course of action and contact a dermatologist. 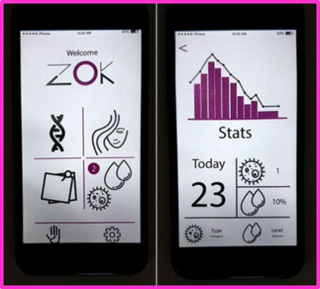 “If amputees must reject a prosthetic because it won’t fit anymore due to an inflamed stump, or an infection, then they can’t function as they would like. Simple tasks may become impossible.

The Zok's purpose is to prevent the very worst scenario of a debilitating infection, to help amputees have a good day, and put them in control. Furthermore, the NHS can intercept the bacterial infection at an early stage, saving money and the user psychological trauma.

The Zok can detect bacteria early on, and from there recommend and contact a dermatologist who can advise on, and resolve the issue quickly. Early detection and lower doses of antibiotics costs the NHS less                     Companion App Concept         money, and causes the amputee less stress. It enables them to get on with life, whether it be working, driving; and not be debilitated by a complication that could have been prevented.”

With the help of several charities, and organisations such as Finding your Feet, United Amputee Community Charity, and the Irish Amputee Football Association, Ashley was able to conduct surveys to better connect with Amputees and specific issues within post amputation care.

“The surveys enabled me to gauge attitudes- what amputees were open to, issues and problems that might be solved, and what they desired. Learning about the psychological impact, 80% said their stump affected their mental well-being. That is a huge, huge number.

I also spoke to a phd student who is currently doing a thesis on the psychological impact ‘the rejection of prosthesis’ so I had a lot of secondary contact through people had spent a lot of time with amputees, just not with them myself.”

When you consider the stress, pain, and frustration that might be avoided, and the money that might be saved by early detection, and preventative measures, the ZOK is an exceptionally smart piece of kit. 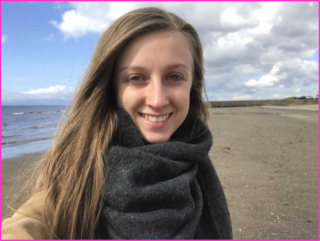 “I feel this will modernise the perception of amputees, generating a new incentive for socialising, wellbeing and help nurture a community who are confident in their bodies.

Amputees deserve the same technological advancements as abled-body people, using wearable technology to aid them in carrying out daily tasks - just in a different way. This will present an opportunity for amputees to continue living as normal without the fear of rejecting their prosthesis.”

We at bespoken would like to wish Ashley all the best in the Blackwood Design Awards competition.

Nominate a great idea for the Blackwood Design Awards 2017/18