Steve will be available for interviews regarding his latest World Record attempt – The ‘JoGLE’ Challenge (John O’Groats to Land’s End in the shortest time ever), between 3-5pm, 27 June 2013 on TGA’s stand – B74, Hall 2 (27–29 June, Telford International Centre). 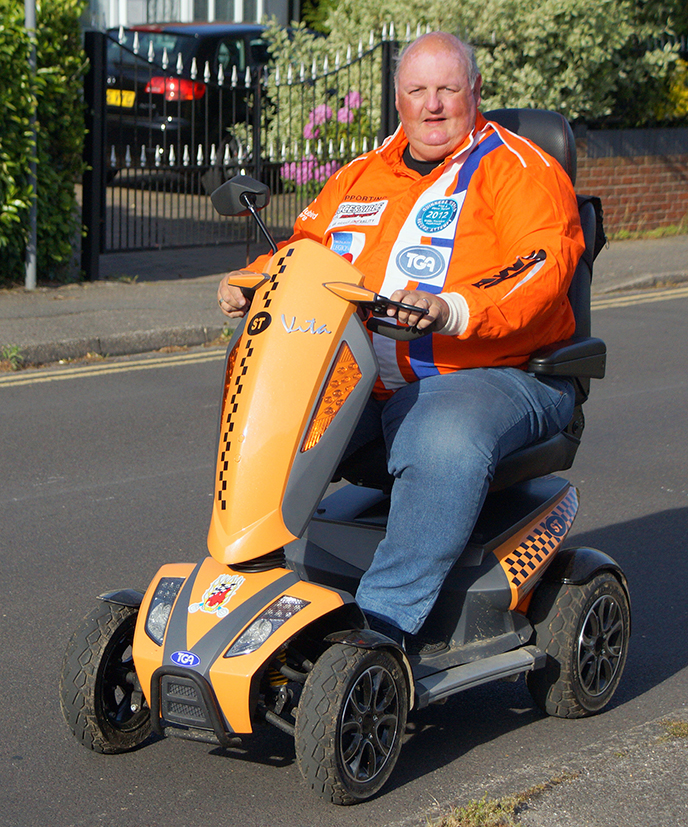 Steve Tarrant, 51 from Poole, is an inspirational individual who survived a highly publicised near-fatal crash incident at Goodwood Festival of Speed in 2000. Steve lost a leg above the knee and suffered multiple injuries when an F1 racing car collided with him at over 100mph whilst marshaling on the finish line at the Goodwood Festival of Speed. Steve managed to miraculously pull through the aftermath of this terrible accident and now marshals at over 30 international motorsport events per year such as the Le Mans 24 Hours, Petit Le Mans at Atlanta and Goodwood meetings. During 2012 Steve was selected as a medal bearing Games Maker for the Olympics and Paralympic sailing events in Weymouth. This subsequently led to him receiving the Big Society Award from David Cameron at 10 Downing Street and appearing on BBC Sports Personality of the Year. Prior to Steve’s involvement in the Games, he attempted an epic 24-hour world record challenge at the 2012 Mobility Roadshow, which has now led to a different attempt in 2014. Steve will be attending the 2013 Mobility Roadshow as an official Ambassador and to publicise this planned new challenge, which will involve driving a mobility scooter from John O’Groats to Land’s End in the shortest time ever. The current, official Guinness World Record stands at 24 days and 9 hours, which Steve plans to beat next summer on a highly robust and reliable TGA Vita X scooter.

Steve explains: “Firstly, I am both proud and honoured to have been appointed as an Ambassador for the 30th Anniversary Mobility Roadshow. My involvement with the Roadshow perfectly ties in with my motorsport links and my continued commitment to developing motoring opportunities for all disabled individuals. To date, I am the only wheelchair marshal for the British F1 Grand Prix and the Le Mans 24 Hours and hope my role, as a Roadshow Ambassador, will inspire others living with disability to achieve more. In terms of my next world record challenge, JoGLE presents a really exciting opportunity to push myself even further than the 2012 attempt. I have already started building my support team and feel confident that riding a TGA mobility scooter once more, I will be tackling this challenge using one of the most reliable models available today. This challenge will clearly reiterate to people across the UK who have restricted mobility, that TGA scooters have the performance and reliability to open up a wider world of care-free independence. Records are there to be broken and I plan to give it 100% commitment all the way.”

Steve plans to ride one of TGA’s latest models during the JoGLE world record attempt – the Vita X. The Vita X is a highly robust and reliable 8mph scooter with independent suspension on each front wheel. This delivers increased stability and safety when users are mounting pavements at angles or driving off-road, as each wheel can react independently to changes in ground surface. Exclusively available as the sporty black edition with striking styling, the Vita X incorporates a host of market-leading benefits including a 25 mile (40km) range, 28 stone user weight capacity, 900w motor and HD 75Amp batteries. It also features an ergonomic tiller with Delta handlebars, racing leather seat and robust, high-grip pneumatic off-road tyres and strengthened alloy wheels.

Daniel Stone, TGA Managing Director concludes: “We are delighted once more to be supporting Steve on his quest for a new world record. Our Vita X with its off-road, high performance capabilities will be ideally suited for this endurance challenge and wish Steve all the very best of luck with his preparations and planning.”

The epic world record challenge will raise funds for Accessible Motorsport, a not-for-profit motorsport organisation for disabled drivers, and the charity MacMillan Cancer Support who cared for Steve’s late mother.