The UK’s leading mobility scooter specialist, TGA, successfully launched the innovative, folding Minimo at Naidex National (Stand B50, 30 April – 2 May 2013, NEC), which delivered high levels of interest from visitors due to its pioneering transportability, comfort and safety in the ‘car boot’ scooter class. 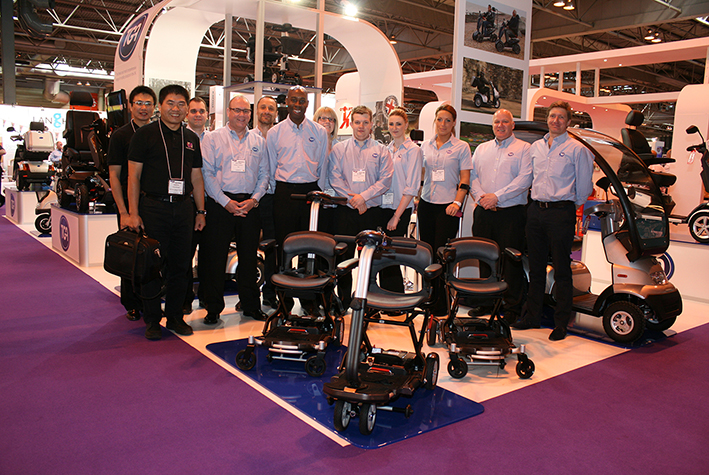 Responding to a market trend towards smaller, more compact models, TGA unveiled the new Minimo at Naidex National alongside two related prototypes that deliver new levels of independence with reduced chassis size. Particularly busy across the whole stand on day one and two of the event, the team experienced consistently high levels of interest regarding the Minimo throughout Naidex as it’s revolutionary folding mechanism and lightweight lithium battery were repeatedly demonstrated.

Daniel Stone, TGA Managing Director commented: “Coinciding with the successful first appearance of our redesigned stand, Naidex National has once again been a success for TGA thanks to the launch of our Minimo. Despite the impression of smaller visitor numbers overall this year to Naidex, the quality of leads we have generated was still good and the Minimo was a real hit with both trade and consumer visitors. Demonstrating the lightweight, optional lithium battery made a significant impact time and again on all visitors along with how easily it slots onto the scooter. The Minimo brings together an unprecedented level of features in the car boot class and with the market trend towards smaller machines growing rapidly, we believe the Minimo represents the future of compact mobility scooter design.”

Showcased alongside TGA’s award-winning range that included the eye-catching, off-road Vita X, the new Minimo is a revolution in compact, collapsible mobility scooter design. It has been developed in close collaboration with TGA’s specialist manufacturers and is unique in the marketplace. With an overall weight of only a mere 27.3kg (60lbs), it represents one of the most advanced scooters available today that folds and fits into a car and requires no parts to be dismantled for storage. Its revolutionary and straightforward folding mechanism is simply activated by a one-handed operation that requires minimal effort and is completed in seconds. Whether used for a day out in a car or for independence locally, the Minimo only requires a remarkably small amount of storage space when not in use. This radically lightweight, yet robust mobility scooter combines the benefits of strain-free lifting for end users whilst providing impressive drivability and rider comfort. The ‘touch-contact’, optional lithium battery only weighs a mere 2.65kgs (5.85lbs), which ensures users can offload it for charging with genuine ease.

Redefining the foldable scooter, the new TGA Minimo has an extremely spacious chassis with a floor well that provides levels of legroom never previously seen in the car boot class. It has a top speed of 6km (4mph), an impressive range of up to 20km (12 miles), a 270w motor type and a quality 45ah S-Drive controller. Following the precedent set by TGA’s already proven car boot scooter, the Eclipse, the Minimo will hopefully be confirmed shortly as being compliant with bus and tram travel which opens up significant lifestyle benefits to end users.