James Eadie from North Lanarkshire, is a retired Middle East long distance lorry driver and disabled golfer, who has regained his independence thanks to a ‘Harley Davidson’ style Supersport mobility scooter from TGA. 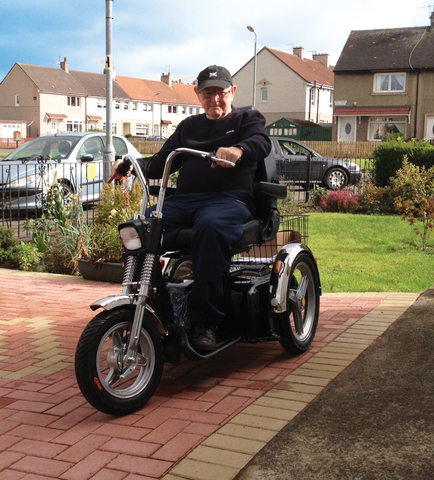 James, 78 from Bellshill near Glasgow, is a real character with many stories to tell from his experiences in the Middle East. He transported gas and oil machinery from the UK to countries such as Saudi Arabi and the UAE over a period of eight years and a typical round trip would take four weeks. He was also stationed in the Middle East for a period of his life and was responsible for shipping oil internally during the Iran/Iraq war. Operating as a long distance lorry driver during this conflict was dangerous at times, however this experience has left James with many remarkable memories.

In between periods of working abroad, James also delivered across the UK and regularly drove to Suffolk from his depot in Scotland. His memories of Halsted and the surrounding area were rekindled when he read an interesting article in the Scottish Daily Record regarding a ‘Harley Davidson’ style mobility scooter, manufactured by TGA who were based in neighbouring Sudbury. This TGA Superport had delivered newfound independence to an Architect from Aberdeenshire and did not resemble a traditional looking mobility scooter. James decided this might be the solution to his mobility issues.

James explains: “My whole career has involved travelling great distances so when your mobility becomes restricted, it’s very difficult to accept. When not behind the wheel, I’ve always used a push bike however I have had to stop cycling because it was aggravating my joints so much. Walking can be difficult for me too over and above my joint problems as I am partially sighted. This means I can struggle to focus on where to put my feet. Looking forward is ok so I knew a mobility scooter would be able to help me regain my independence. When I read about how a TGA Supersport had changed the life of successful architect Doug Forrest who had MS, I knew this machine was the one for me. I looked up TGA on the Internet and since Harry has delivered my bike, the ability to go out on my terms has now returned.”

James continues: “Before I was on my black and chrome Supersport, I was travelling into town and to the Doctor’s Surgery by bus however they were always so unreliable. I have spent my career making sure I arrived at far-flung destinations on time and therefore do not like being late. Now I can leave my house knowing full well I can arrive for a doctor’s appointment on time and with rushing. Whenever I go out on my Harley, I am stopped by passers-by who want to know more about this striking scooter. I always have time for a wee chat and tell them all about TGA and what a difference this Supersport has made to my life. The boys in my golf society will also be keen to hear all about it when I play golf next.”

In his spare time James is a keen gardener and plays golf with the Scottish Blind Golf Society. This charity was established in 1982 and James has been a member since 2000. As he is partially sighted, he has played in numerous tournaments across the UK and managed to beat the blind world champion Simon Cookson in 2009.

The 8mph TGA Supersport is the mobility scooter of choice for many members of the nationwide Disabled Ramblers Association as it has the stability, manoeuvrability and power to handle most off road situations. Designed to reflect the characteristics of a motorcycle, the black and chrome TGA Supersport provides a visual statement which has led to it recently appearing in the Robbie Williams and Dizzee Rascal music video ‘Goin’ Crazy’.