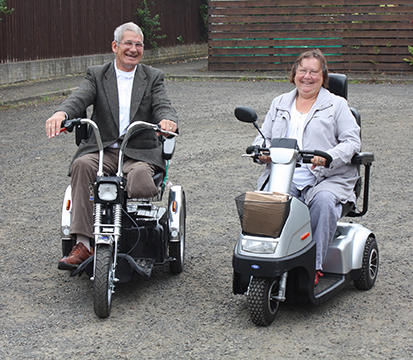 Amputee ex-Royal Marine Adrian Spriggs, 60, from Dundee and his mobility-restricted wife Phyllis are two lively remarried characters who have both rediscovered their love for the outdoors thanks to two ‘Easy Rider’ TGA mobility scootersfollowing the tragic loss of their previous partners.

Originally from Bournemouth and before retiring, Adrian was a Royal Marine who saw active service on the frontline in Northern Ireland during the troubled 1970s. Seven years ago he met Phyllis from Dundee through online dating after they had both experienced partners passing away. Subsequently this resulted in Adrian relocated to Scotland and they became married again six years ago. However as time has progressed, Adrian’s disability has resulted in an increased difficulty to venture outside that has impacted on their wellbeing and happiness.

The Spriggs live in a very picturesque part of Scotland on the Firth of Tay coastline however they were not able to enjoy going out together until Adrian discovered the TGA Supersport as he explains: “I first saw this marvelous TGA scooter in a Motability magazine and was attracted by its Harley Davidson type styling. It looked robust and sturdy enough to help me venture off road in my local rural area so I thought I would request a test drive. Well, Harry who demonstrated the Supersport was brilliant and I was immediately convinced this could change my life. As soon as my scooter arrived I was off discovering new places down cycle tracks and coastal paths that were far from roads and which I never knew existed. The only problem was my wife can’t walk very far either, so I couldn’t share my new found freedom with her which made me sad.”

Adrian continues, “Our two-year-old Jack Russell Sasha needs regular walking and we love to spend time outdoors with our grandchildren on their bikes. I was now fully mobile and loving my ‘Harley’ scooter however it was not so good for Phyllis, that is until she decided to also purchase a TGA scooter. She selected a Breeze Midi 3 which is another three-wheel model from TGA but is more compact than my Supersport so ideal for around town. Since we have both owned a mobility scooter, I can honestly say life couldn’t be better and I can now continue with my passion for painting and photography. We both go off adventuring together so I can capture local scenes on my camera, which I then convert into oil and acrylic paintings when I get home. Phyllis can easily get into the local village to do the shopping and I love travelling along the coast. We like putting pictures of ourselves on our scooters on Facebook and would recommend these fantastic TGA machines to everyone with mobility difficulties.”

Adrian’s TGA ‘Easy Rider’ Supersport is popular across the UK, as it resembles a Harley Davidson motorbike more than a traditional mobility scooter. Many interesting and unique individuals ride TGA Supersports such as Janet Weller from Gloucestershire who uses it for dog agility training, Mike Bruton MBE from Berkshire owns one as the President of the Disabled Ramblers and Steve Bunker from Yorkshire pimped his up with car wheels and air horns! One of the more established products from TGA, the Supersport has an impressive and trusted heritage for stability, manoeuvrability and the capability to handle most off road situations. Whether providing independence in town or in rural settings, it has the advantage of a top speed of 12km/h (8mph), a range of 48km (30miles) and a high ground clearance of 125mm (5”).