Despite living with Parkinson’s, Janet Murray, 68 and a retired nurse from North East Scotland, continues to volunteer at The Buckie and District Fishing Heritage Centre thanks to the revolutionary new TGA Minimo mobility scooter. 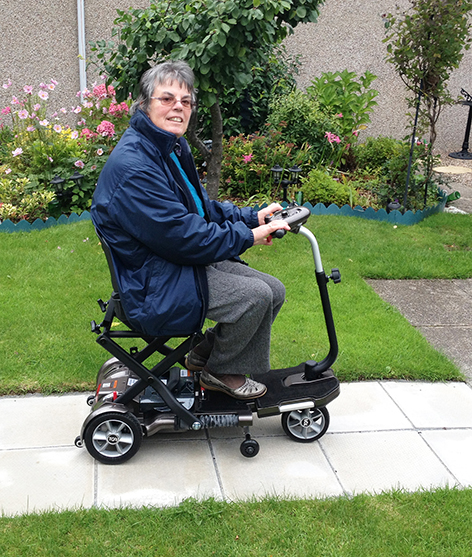 Janet lives in the coastal town of Buckie, which is north west of Aberdeen and has regained her independence both indoors and out with a pioneering type of new, foldable mobility scooter. Janet’s condition restricts her mobility so walking around home or out in the village was extremely difficult until she owned a Minimo. She was diagnosed with Parkinson’s 10 years ago following a successful 38-year career as a nurse. Janet described her job as ‘absolutely amazing’ and a period in her life that she ‘would not swop for anything in the world.’ As her condition is now ‘catching up on her’ Janet was desperate to maintain freedom further afield in the car, however her previous scooter was impractical for transportation. Her ability to spend time volunteering at the local fishing heritage museum was also under jeopardy until she saw this new type of collapsible mobility scooter from TGA. Janet is a tour attendant at The Buckie and District Fishing Heritage Centre, which is a Scottish Tourist Board Three-star visitor attraction. It was established in 1986 and displays photographs, memorabilia and model ships celebrating the history of the Moray Firth.

Janet’s TGA Minimo represents a revolution in compact, mobility scooter design. It will cleverly collapse into a compact size for easy storage and without the need to dismantle parts, which provides a significant benefit to end users who live with restricted mobility. The Minimo is available with a super lightweight lithium battery option that can be raised with a single finger so strain-free lifting is assured. The folding mechanism is activated by a simple, single-handed operation and when assembled, the Minimo provides remarkable levels of manoeuvrability, comfort and safety.

Janet comments: “I haven’t owned my Minimo that long as its design is so new, however I already love it. I’ve never seen a scooter like this before and as my previous one was impractical for storing in the car boot, my mobility outside of Buckie was very restricted. Now my Minimo is sure to travel with me wherever I go and as it is so manoeuvrable, I have been driving around inside at home which is a massive help. The fact that I can get the Minimo into the car in one piece is a big plus for me and also means I can continue being a tour attendant at the museum. I can negotiate around the exhibits inside the building whilst explaining our nautical history to visitors from all over the world. I am a strong believer in keeping Scottish history alive so being a supporter of The Buckie and District Fishing Heritage Centre is very important to me. Time spent volunteering is a vital part of my life now since being diagnosed with Parkinson’s and without my TGA scooter, I know this would have been affected as my condition develops. I can also now visit the local shops independently and go out to enjoy the beautiful coastline thanks to my Minimo.”

Daniel Stone, Managing Director of TGA who supply the Minimo concludes: “It always fills us with great pride when we see the freedom and positive impact on lifestyles and hobbies that our mobility scooters deliver. The Minimo brings together an unprecedented level of features in the car boot class and with the market trend towards smaller machines growing, we believe the Minimo represents the future of compact mobility scooter design.”