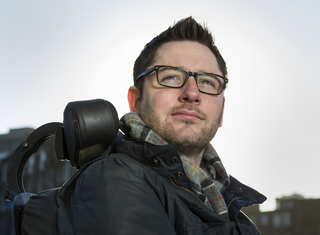 Gordon Aikman led a successful career as a political researcher and campaigner before being diagnosed with motor Neurone Disease aged 29. He subsequently launched Gordon’s Fightback, a campaign to raise funding for research as well as awareness of the disease. Gordon’s Fightback garnered huge praise and support from several party leaders including First Minister Nicola Sturgeon whom Gordon was able to influence to fund specialist nursing and double the number of MND specialist nurses in Scotland. He further raised over £500,000 in just 2 years of campaigning. His achievements earned him a British Empire Medal in the 2015 Birthday Honours list "for services to Motor Neurone Disease awareness and research". Gordon sadly passed away on the 2nd of February 2017.

Just a few weeks before his death, Gordon served on the judging panel of the Blackwood Design Awards 2016.

A night to remember 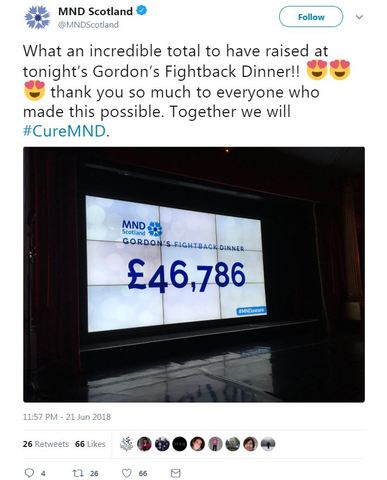 On the same day, Scotrail (official charity partner of MND Scotland) announced that a new train was to be named in honour of Gordon. Commenting on Twitter, Gordon’s husband, ITV journalist Joe Pike thanked Scotrail, saying “We are incredibly touched one of Scotland’s high-speed InterCity trains is to be named after Gordon.”

Also present was 24-year-old Lucy Lintott, a self-described MND warrior and the youngest person in Scotland with MND. Last night she became the first recipient of the "Fightback Spirit" award, which recognises a person’s inspirational contribution to the fightback against MND.

Diagnosed at 19, Lucy’s story has echoes of Gordon’s as she doubled down in her efforts to live the life she wanted rather than the one her diagnosis imposed. She has launched a popular blog that includes a bucket list which already has several extraordinary things ticked off including her goal to raise £100,000 for MND Scotland. 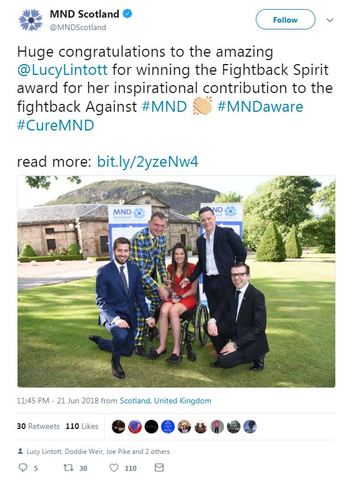 In an article on the MND Scotland website, Lucy said, “I’m honoured to get the Fightback Spirit award. Gordon and I have received many awards together over the years, so getting one named in memory of him is very surreal.”

What else happened on #GlobalMNDAwarenessDay?

MND Scotland are running a myth-busting campaign and asking people to submit their stories. If you would like to share your MND story you can go to Twitter and share using @MNDScotland or #MNDaware. Alternatively, you can contact Niamh Callan and Craig Watson in the Communications team at communications@mndscotland.org.uk.