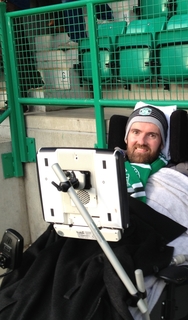 It all started out “normal” for Euan MacDonald. He was born and raised in Edinburgh, and as a young man he studied at university in both St. Andrews and Edinburgh before moving to London to work in the financial services industry.

But in 2003 everything changed:

“I noticed a loss of power in my thumb when trying to change gear on my bike. It seemed innocuous at the time but 2 months later I was diagnosed with Motor Neurone Disease,” says Euan MacDonald.

The disease is also known as ALS and is a form of sclerosis, and is a debilitating neurological disease that results from the degeneration and death of the large motor neurones in the brain and spinal cord. This causes a worsening muscle weakness that leads to loss of mobility and difficulties with speech, swallowing and breathing.

After the diagnosis was given, Euan MacDonald moved back up to his family in Scotland, and has with the years become a wheelchair and ventilator user.

“But my condition has progressed slowly: I am one of the lucky ones,” he adds to the story.

Euan MacDonald is 38 years old, and like most other people, he likes to go out: To football matches (Hibs is the favourite club); to concerts; the cinema. And so on.

“I wanted to go out for a drink with some friends, I wanted to go somewhere new, and I couldn't find any information on accessible bars in Edinburgh,” tells Euan MacDonald.

And that is about when the idea sparked for “Euan’s Guide”: A website where disabled people can share accessibility reviews.

“It is really important to me that barriers such as these are removed so I can get on with leading my life,” he says.

Of the best and the worst

Having been disabled for a decade Euan MacDonald has tried just about anything when it comes to accessibility:

“My worst experience was at a well known venue in Glasgow, which shall remain anonymous, but should know better. They had sold me accessible tickets. When my carer and I arrived, the manager offered to carry me up the stairs, and when I politely refused, I was offered £200 to go away!”

It is experiences like that he wishes to avoid with the upcoming site.

But it will also be a place for the good stories:

“Some of my best experiences have been the most surprising, such as T in the Park, and some of the venues in Edinburgh that you think will be terrible, as they are in old buildings, but where you find that, although the physical accessibility isn't great, the staff more than make up for it,” tells the Scot.

All his own experiences will soon be shared on Euan’s Guide, and he hopes that many other disabled people in Scotland and the rest of the UK will take part and review the places they go for one simple purpose:

“For me, a site like Euan's Guide will remove the fear of the unknown. If I can read some reviews from people who have similar accessible issues, I'm much more likely to trust them than a venue website, which just displays a disabled badge,” says Euan and adds:

“My guide is designed to provide an accurate preview of the venue & should remove the element of surprise when you arrive somewhere.”

You can visit Euan’s Guide and leave your own accessibility reviews here (LINK: http://euansguide.com/). The official guide is meant to launch in the autumn, but Euan is not just busy creating the site:

He also works very closely together with University of Edinburgh, which have created The Euan MacDonald Centre for Motor Neurone Disease Research. And with the Voice Bank Project, which you can read much more about in this week’s Featured Innovation (LINK).