Pokémon Go - Currently Taking The World By Storm, But Is It Accessible?

The current craze in the ever-evolving world of gaming is, if by some chance you’ve been living under a rock and haven’t heard, Pokémon Go! It has been credited with bringing together people from all communities and encouraging children (and teenagers) to play outside and get fit by walking vast distances to find Pokémon. However, there are various aspects of the game which have attracted some criticism for being limiting to players with disabilities.

Pokémon is a globally and phenomenally successful video game series, imported from Japan, which became a craze among school children in the late 1990s and early 2000s. Not long after, an equally successful trading card game and anime TV show was launched and it was near impossible to escape (much to the chagrin of parents everywhere!). This writer remembers rather vividly being completely enamoured with the universe, along with seemingly all friends, classmates, siblings and cousins.

After keeping under the radar for many years since its glory days circa the millennium, the creators at Pokémon Inc. decided to celebrate its 20th anniversary by unleashing Pokémon Go. With millions of downloads worldwide and $1 billion daily revenue in the US alone (according to Forbes), it has proven to be an exceptional hit.

The concept behind Pokémon Go is that, after making a customised character to be your Pokémon Trainer, you walk around your local area in order to find Pokémon. The app will tell you where you can track local Pokémon, and you must catch these cartoon creatures by throwing a virtual ball – or Pokeball – to trap them in.

Despite the great success of the game, not everyone has been able to enjoy using it. For wheelchair users, the movement-related focus of the game has proven problematic; to the extent they can feel alienated from both the game and other players. Speaking to gaming blog Kotaku, Mandy Drago, a 21-year old player who has been using a wheelchair since an undiagnosed illness caused her to collapse last autumn, notes the various difficulties with the game for her circumstances: “It was a horribly depressing experience,” Drago said. “[My friends] came back excited to tell me about their stories and I just felt really left out. A lot of the PokéStops I’ve seen are tucked away on running trails, or places that aren’t handicapped-accessible,” she continues, “Because of that, I can’t really go to as many PokéStops. I can’t go find new Pokémon in different places so well. And because of that, none of my Pokémon are powerful enough to get any use out of the gyms. Everything is much much harder, but still doable. The hardest part is hatching eggs. For me, walking from my bed to my bathroom can be a challenge on some days. So the idea of walking 10 km to hatch an egg...it seems like a nearly unclimbable mountain.”

Issues with physical navigation aside, there is the issue of holding a phone whilst manoeuvring a wheelchair. It has also been mentioned by many players that hatching eggs, an essential part of Pokémon Go, is far more difficult for wheelchair users as it requires a longer-than-usual journey. 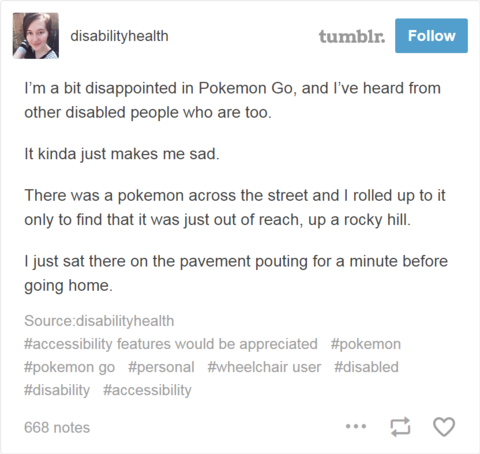 Kotaku also spoke with Steven Spohn, who serves as the Chief Operations Officer of the AbleGamers foundation. He believes Pokémon Go has caused many gamers with disabilities to feel left out. “It’s a pretty unfortunate scenario for people with disabilities,” he says. “Even if Nintendo could implement every accessibility option I could dream of for handicapped gamers, they would still miss out on the social aspect of it. It’s a shame. They’re just left out of another scenario.”

Pokémon Go’s release has proven to be effective in allowing people to physically come together to enjoy the video game. For physically disabled folks, who can already feel alienated from society, missing out on this can exacerbate such feelings, according to sources interviewed. Thus, Pokémon Go presents a challenged to the growing disabled gamers’ movement. It is in the unique position of being one of the most popular video games of all time, and yet one of the least accessible to gamers with physical difficulties.

In an interview with gaming website Polygon, Steven Spohn mentions that: "Developers could have easily enabled options from AbleGamers Includification [a guide of useful development tips] such as options that would allow one-button Pokémon catching, remote travel, and hatching eggs on a timer,"

In response to suggestions that increased accessibility for Pokemon Go could harm the core concept of the game, Spohn comments: "That's absolutely not true, Options could be added to allow a mechanic to go get the Pokémon for you at a cost. Or hatching eggs after a certain amount of time when you spend a little money."

Spohn added that for players with severe physical disabilities, not being able to play the game at all because they are limited in their ability to move freely is already isolating, and by not creating better options for giving players with disabilities play the game increases feelings of isolation and exclusion.

"The developers could have removed some of those barriers on the virtual playing field and still protected the core concept of the game," he said.

There have been several stories of players with disabilities playing the game whilst receiving help from friends, but Spohn believes that’s not good enough for everyone who wants to play Pokémon Go but can’t. He has, however, praised Niantic for creating a game which has allowed those suffering from mental illnesses significant release. It has been reported that players with depression, social anxiety and other mental conditions have noticed their moods have been greatly uplifted and some have revealed it has encouraged them to leave home and socialise with other people.

"The game is doing a lot to support and enable people with emotional disabilities such as social anxieties and PTSD. As well as some mental disabilities that help ease traumas and fears," he adds.

It is believed as many as 1 in 5 gamers have a disability, whether physical or otherwise (according to a 2008 survey by PopCap Games). It is therefore imperative that the makers of Pokémon Go and other popular games find ways to bring more inclusive aspects in order for all game lovers to get maximum enjoyment out of their products.

We would love to hear your thoughts – should Niantic, and how, create options for better accessibility in Pokémon Go? 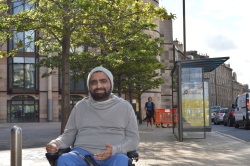 Ambitious project to open upbeaches to people who have disabilities 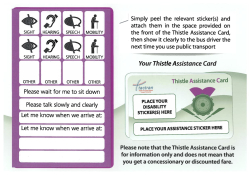 New card introduced for those travelling with disabilities