Another year and it was another successful Blackwood Design Awards.

Held in Datalabs conference room in the magnificent Bayes Centre in the heart of Edinburgh’s University campus it was a setting fit for the occasion.

Judges arrived from across the country at mid-day:

Toby Mildon – A diversity and Inclusion specialist and former BBC Ouch blogger whom braved the British rail network to visit us from London (only 10 minutes late!).

Tina Gordon – the disability talent and pathways manager for Basketball Scotland – a wheelchair basketball coach recently named coach of the year at the Scottish Women in Sport Awards.

Ryan MacDonald – housing adviser and previously the Ambassador Network Manager at Euan's Guide, a fantastic resource for those with disabilities.

John Logan – Blackwood tenant and Scrutiny panel member – he is passionate about independent living and design.

After the judges arrived we the day we had a tour of the building – introducing us to the open plan offices, a merging of innovative and academic thinking, creating a beautiful environment that reflects the values of the University of Edinburgh.

Another part of the Bayes building was their robotics facility – on display on the bottom floor was the robots of the future and although there was fears of the robot uprising, luckily it didn’t happen just then to interrupt the Blackwood Design Awards.

First judging of the day was for Best New Product a run of voting for each product and then a group discussion. On the shortlist we had the guidance aid RambleTag on their meteoric rise from their successful Kickstarter last year, the Small Items Gripping Aid from Active Hands building upon their already successful premise, and Be My Eyes a video app that connects the visually impaired with a sighted volunteer over video – allowing for help with anything from expiry dates, distinguishing colours or navigating surroundings.

RambleTag was praised for the simplicity and elegance, Active Hands for it’s ease of use in swapping items and practical evolution of a product. It was very close but it was Be My Eyes that won the day. The judges spoke very positively on this interactive, digital and global solution for the visually impaired.

Next we had the Best New Concept category – where our entrants Skyped in and pitched dragon den’s style, with a quick pitch and then a Q & A session.

We had Enayball, an adaptation that allows a wheelchair user to paint – effectively turning the wheelchair into a mark-making device and the AIR CRADLE ® Patient Transfer System a revolutionary alternative to slings and hoists.

Enayball was born from giving creativity back to people that no longer physically could and AIR CRADLE was continuing the legacy of the famous inventor David Garman. Both products were great entries and it was nice to see two concepts against each other that both wanted to enhance the lives of those with disabilities yet different in their execution. Both fared well but Enayball caught the imagination of the judges and was declared the winner of best concept.

After a short coffee break the judges got straight into the last category of the day.

The final round of judging was the Best Collaborative Project by a University or Institute of Higher Learning – with two local competitors with PHD student Scott MacLeod from Heriot Watt University, Edinburgh and his Assisted Daily Living assessment project and a group of product design students from Napier University, Edinburgh with their design for a functional tablet holder.

The tablet holder was magnetic, multi jointed and designed to attach to a wheel chair and throughout the home of someone with a disability.

Scott’s project utilised Pepper as a live-in assessor for those perhaps in the early stages of dementia or neurological conditions, allowing for a less intrusive and stressful format for diagnosis. Essentially Pepper would ask the user to do things such as make a cup of tea or locate an object commonly used – this allowed for a prognosis in helping caregivers, family and doctors to accurately assess if an individual’s level of living independently.

Scott won the group discussion and the category with his project, it being the most effective for independent living with real world benefits that will be tangible in the near future. 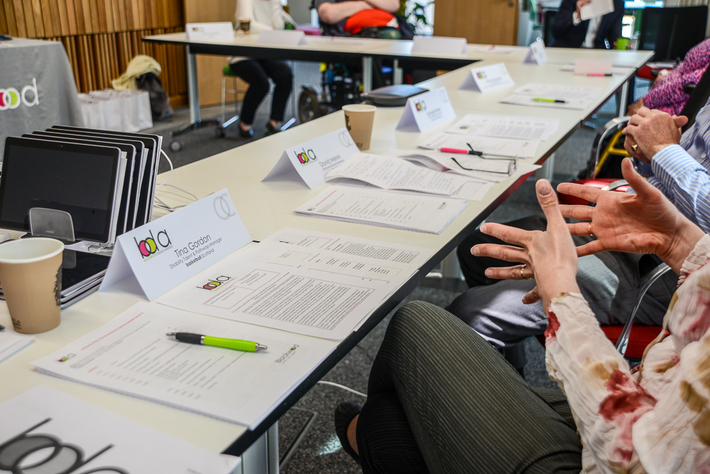 It was a great day! A big thank you to the staff and judges that made it along, and of course to all the entrants that put their products, concepts and projects on the line for our judges.

Congratulations to our winners: