We were thrilled to learn this week that Grant Douglas, who won the Blackwood Design Awards 2015 with the S’up spoon, has been made a Member of the Most Excellent Order of the British Empire (MBE) in the New Year honours list. This is a fantastic honour and well deserved by Grant for his work as founder and CEO of S’up Products. We got in touch with Grant and fired a couple questions his way to find out more.

When did you find out? Did you receive a letter?

“I received a letter on the 21st of November, the envelope had ‘The Cabinet Office’ written on it and I thought ‘what have I done?’! but then I saw that it was addressed to ‘G Douglas Esq.’ which made me think ‘I can’t be in trouble’! and then I thought ‘No, it can’t be an honour’.”

Did you have any idea? What was your reaction upon finding out?

“Absolutely no idea whatsoever, I went into a total state of disbelief and had to read it about 5 times before it sank in.  After my disbelief, I then thought ‘do I want it?’ ‘if it’s just because I’m disabled, then no’, but then two thoughts crossed my mind, some person/people have nominated me for this and I consider it discourteous to reject gifts, also the work I have put into S’up with my only reward being to help other people.”

Will you be going down to Buckingham Palace to receive it?

“Initially, when I phoned the number on the letter, after the shock of hearing ‘Buckingham Palace, how can I help you?’  I was told that my investiture would be in June at Holyrood Palace, however I wrote a very polite letter requesting an earlier date as my parents are away in May and June and for it to be in Buckingham Palace as my Mum’s family is down south.

So I got e-mailed a choice of dates in March and will be getting it from Buckingham Palace on the 16th - if you don’t ask...”

What (specifically) are you being awarded an MBE for? S’up Spoon presumably, but is it for design, business, accessibility, raising awareness, all the above?

“As I’ve not found out who nominated me, your guess is as good as mine. All I know is the citation reads ‘Founder and Chief Executive Officer, S’up Products Limited.  For services to People with Disabilities’ so, I’m presuming it’s for the way that I managed to get my idea from ‘just an idea’ to a product that is helping people around the world and that all the profits are going back into the company to develop other products that will help people with shaky hands. It could also be that I’ve been promoting disabled people rights through my work in the voluntary sector for approximately 20 years.”

What has the response been from others (e.g. Parents)? Who have you heard from?

“On the 21st of November, when I received the letter, the first sentence included the phrase ‘in strict confidence’ until the list was published at 10:30pm on Friday 29th December, so I decided to tell nobody until Christmas Day when I would tell my parents.  But how would I tell them? I decided to make a scroll with a message inside and managed to persuade a friend to help me put it inside a cracker for my parents to open just before our Christmas dinner that we were having in a hotel. Dad started to read ‘I’m taking you to London’ out loud, then went quiet and tears of joy filled his eyes before the hugs etc started as he told Mum (and the waitress!!!).

The comments/likes/retweets from friends of both S’up and personally have been overwhelming, I was a bit apprehensive that I would receive ‘why you?’ type of comments, but I haven’t, nearly every comment has been ‘you deserve it’.

I tweeted Adam Hills as the I managed to get him to demonstrate the spoon live on his show ‘The Last Leg’ and he tweeted all his followers with a congratulatory message (On my ‘bucket list’ is to get some tickets to his show, but have been unlucky in the ballot to date, I did tweet to ask him for tickets for the 17th March – the day after my investiture but no response unfortunately).”

What does it mean to you to receive this honour?

“It’s actually similar to when we won the Blackwood Design Award in 2015, it gives me reassurance/recognition that I have led the company in the right path and am doing a good job.”

How do you think it will impact S’up Products?

“I’m hoping that not only it’s profile will be raised but also that it will be easier to get the attention of decision-makers when we are trying to achieve our goals, like get it in to the Health Service.”

“I wish that I could share the award with 4c design and my business partner, Guy Watt, as without them, this wouldn’t have been possible.” 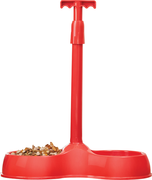 Keep your beloved pet with you longer thanks to this clever little ...